Because diamonds have so many different cuts and can vary so much in quality, you can almost say all shapes of moissanite look like some variation of diamond; it depends on which particular diamond cut you are comparing to. However, there are some diamond cuts that are very common, and therefore familiar to most people, such as round, oval, cushion, emerald, princess, asscher, and pear. When comparing moissanite to these common diamond cuts, you would be hard-pressed to tell the difference. In general, a round moissanite has the most diamond-like properties because the ideal cut diamond has very standard proportions, which can be replicated in moissanite. There is no standard for fancy cut diamonds, and no ideal cut grade. Just the cushion cut alone has over 10 completely different cuts.

I’ve only heard of Charles and Colvard moissanite. Why should I consider a different brand?

Our goal is to make moissanite look as much like diamond as possible, and we have gone back to the drawing board many times to perfect our cuts through painstaking trial and error. If you cut a moissanite exactly like a diamond, it will look different. Therefore, every facet needs to be adjusted to match the brilliance and fire that a diamond produces. When shopping for moissanite, chose a trusted brand that can deliver the exact product you are looking for.

How long will moissanite last, and how should I care for it?

Moissanite should last for generations, or as long as diamond. Unlike cubic zirconia, moissanite doesn’t go cloudy over time. It also isn’t as prone to chipping or scratching as cubic. As long as moissanite is well cared for, it should last indefinitely. Just like diamond, moissanite should be cleaned regularly. You can use regular jewelry cleaner to wash off oils, dust, soap scum, fingerprints, etc. For more stubborn stains, you may need to use silver polish and a cloth to restore its original lustre.

When resizing your ring, the moissanite stone doesn’t need to be removed because it can handle the high heat from soldering. However, the jeweler needs to make sure he or she cleans the stone very well before applying heat, otherwise any oils on the stone will get baked on. Over time, this baked on oil will attract dirt, which will become extremely hard to remove. A jeweler should put the ring in a mild acid bath and dry it completely before applying heat.

A crushed ice cut generally applies to elongated shapes, such as ovals, cushions, pears, and radiants. With moissanite, the standard cut that most companies cut is the brilliant cut. It usually sparkles a bit more and has well-defined facets. The crushed ice, on the other hand, has broken up facets, much like broken ice. For the most part, elongated diamonds will have a crushed ice appearance, even when they are cut like a brilliant. One reason this happens is because diamonds are cut shallower than moissanite to save material, since diamonds are very expensive. A shallow, elongated stone will always give a stone a crushed ice look because of how the light refracts. Since moissanite is much less expensive than diamond, it can be cut deeper to give the stone well-defined facets like the top stone in the video. The higher refractive index of moissanite helps with this as well.

The diamond cut (the middle stone in the video) is somewhere in between the brilliant and crushed ice in appearance. It looks very similar to a brilliant cut oval diamond, which under certain light, looks like crushed ice, but the facets are more in-focus when compared to the bottom stone.

What are windmills on an emerald cut?

Windmills are extra facets added to the bottom of the emerald, which makes it look like there are four windmill blades going from the corners to the center of the stone (see the stone on the left below). Having windmills or not is completely personal preference because diamonds are sometimes cut one way or the other. The difference is usually quite subtle, but if you want the corners to be slightly more defined, choose the windmills. 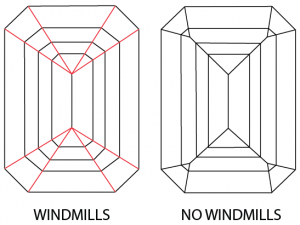 What size should I get? Does moissanite look more “fake” as it gets larger?

What I always tell people is, get the size you want. However, while many people might want a large stone, they don’t want their moissanite to look “fake” (I put fake in quotes because moissanite is a REAL stone, and there’s nothing fake about it). Moissanite prices usually increase linearly as the carat size increases, ie. a five carat moissanite will cost approximately five times more than a one carat. Diamond prices, on the other hand, go up exponentially as the carat size increases. A good quality five carat diamond can cost 20 times more than a one carat diamond of similar quality. Because moissanite is lab-created, it’s comparable to a high quality diamond in its cut, clarity, and color. That means the five carat moissanite that you’re wearing could look like a $150,000 diamond. Unless you’re rich and/or famous, you might have a hard time convincing people your rock is a diamond. If you simply love moissanite for the beautiful stone that it is, this shouldn’t matter to you.

How is moissanite created?

Moissanite is made up of silicon and carbon, synthesized to form silicon carbide. It is produced by heating silica sand and carbon to high temperatures inside a furnace to form a boule as show below. 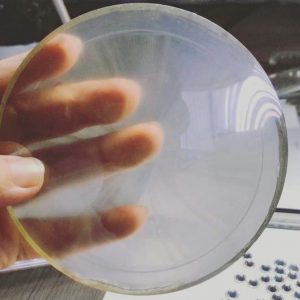 The boule is cut up into many pieces and made into preforms, which are simple shapes that make the stones easier to attach to the faceting dop stick (the stick that hold the stone during faceting). The preforms are then faceted on a lapidary grinding wheel, similar to the ones used to facet diamonds. After the stones are faceted and polished to perfection, they go through an annealing process. The annealing process involves putting the stone in a furnace again under high heat an pressure. This further whitens the stones and makes them clearer and sparklier. You can see the boule above is not perfectly clear.

Almost all moissanite from all manufacturers are annealed, otherwise the moissanite will appear yellow and lifeless. However, this does not mean that moissanite is “enhanced”, as the annealing process is considered one step in the manufacturing process. A few years ago, when moissanite rough was not as white as they are today, a third party company was often hired to whiten stones through an enhancement process that involved electric shocks to the stones, which often damages them. Our stones are not enhanced in this way.

Here’s an interesting fact: the annealing process is permanent; however, recutting the stone after it has been annealed will change it back to its pre-annealed state. In other words, re-faceting moissanite would mean the stone will need to be annealed again. That’s why altering a moissanite gemstone will void the warranty.

If you have more questions that we haven’t addressed, please don’t hesitate to contact us.

Get great deals sent directly to your inbox!

WhatsApp Chat is free, download and try it now here!